Planning for drone safety: understanding the rules, regulations, and risks 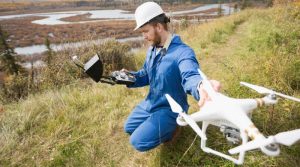 As their commercial applications take off, drones are being more frequently deployed on construction sites as the “eyes in the sky” that can deliver everything from 3-D imaging and progress inspections to site mapping and surveys.

Recent data shows just how indispensable these tools are becoming. Sparked by relatively low cost, safety, and ease of use, construction drone usage has skyrocketed by 239 percent in the last year, according to a report measuring annual commercial drone growth trends. Another study pegs the total value of drone activity at $1 billion today, up from $40 million in 2012. And by 2026, it’s estimated that commercial drones will have an annual impact of $31 billion to $46 billion on the country’s GDP.

While drones look to be an industry game-changer, it’s crucial to become familiar with the drone safety practices, rules, and regulations before bringing a drone to your own job site. Here are some highlights.

The Federal Aviation Administration (FAA) regulates U.S. aviation airspace – including drones. To fly a commercial drone legally, your construction company must comply with the requirements of the FAA’s Small Unmanned Aircraft Systems (UAS) Rule, Part 107. After obtaining a remote pilot certificate from the FAA and registering your drone as a “non-modeler,” you must then follow nine key FAA operating rules (or apply for waivers for exceptions):

Even after you gain a firm understanding of the rules, it’s wise to ensure you stay up to speed on changes in federal, state, and local regulations. This is especially important because, as drone regulations continue to evolve, many rules will become obsolete or more streamlined.

For example, an important Part 107 rule update this year has made it possible to get virtually instant approval to fly commercial drones in certain corridors of the U.S., thanks to recent expansion of the FAA’s Low Altitude Airspace Notification Capability (LAANC).

This automated process for airspace authorizations allows pilots to get flight plans approved in seconds, instead of relying on the manual permitting process, which can take months. Rolled out in six geographic phases from April to September 2018, LAANC is now available at nearly 300 air traffic facilities covering approximately 500 airports.

Clear flight paths and work zone boundaries, for example, can reduce the risk of a drone striking another property. Pilots should also know how to respond to emergencies, such as a sudden loss of power or communication with the drone.

Another important consideration is proper management and use of drone footage. “Know who oversees the data collected, who has access to it, and how you are going to protect it,” advises Mills. “And if a sub-contractor owns the drone, review insurance policies to make sure coverage will respond to that risk.”

Proactive risk mitigation is also important to manage emerging challenges facing the construction industry when it comes to drone regulations and safety compliance.

If a construction company leases a drone instead of purchasing one, “the firm bears the responsibility of making sure the third-party vendor is insured,” Fucentese notes. Always vet the vendor, and ensure they carry “non-owned” aviation coverage with adequate limits to handle the size of the risk.